We ship the same day

All products in stock 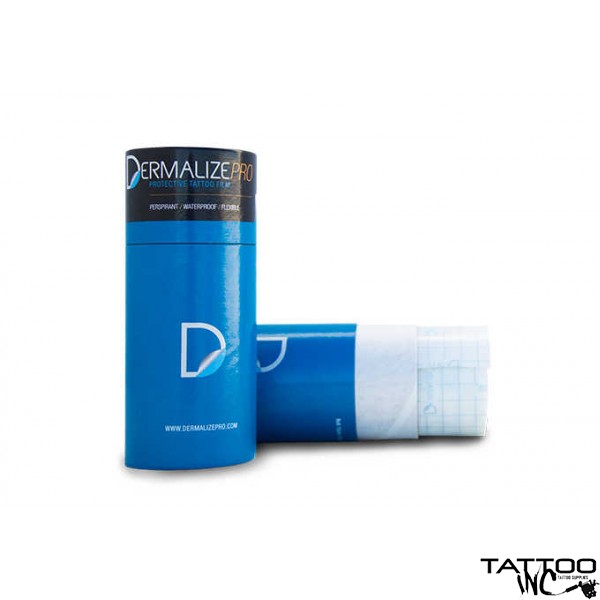 The first piece of Dermalize Protective Tattoo Film can be left on the skin for the first 12 to 24 hours, the exact time will depend on the amount of fluids that the wound exudes, this will vary from person to person. In case of excessive bleeding or weeping the film can be replaced with another piece before. In most cases people choose to wear the first piece for the first 24 hours. When removing the film make sure to carefully wash the area with soap and water, and gently dry the tattoo. Once the skin is completely dry you can apply the second piece of Dermalize. This second application can be kept on for another 48 hours to 5 days. The total use of Dermalize, using both applications is between three and six days.

DERMALIZE PROTECTIVE TATTOO FILM is the only certified all-in-one tattoo aftercare solution for the initial healing stage of a tattoo. A thin self-adhesive film that provides a moist healing environment during the initial, and most critical, healing stage of a tattoo wound. It protects the new tattoo from friction and provides a WATERPROOF, ANTIBACTERIAL BARRIER that prevents pathogens and external contaminants from entering the wound. The film is BREATHABLE, letting oxygen in and allowing excess moisture vapor to be released from the wound. It’s light to wear, FLEXIBLE and stretchable, which allows it to be placed anywhere on the body, also on large scale tattoos. It enhances cicatrization and guarantees a persistant brilliance of the tattoo colors. Dermalize Protective Tattoo Film is made of polyutherane and hypoallergenic acrylic glue and it is registered as a medical device of class I with the Italian Ministry of Health, as well as with the American FDA (Food & Drugs Administration). It is dermatologically tested and before its release on the global market in February 2015, it had been tested for about 2 years by a pool of 10 among the most qualified and renown tattoo artists in the world. The trademark Dermalize product sets itself on the global tattoo market as a certified medical replacement of the commonly used alimentary cling film that has always been used in the tattoo aftercare, very often in an improper manner. It represents a fundamental step and sets a milestone in the history of modern tattooing: from a film that was initially used in the food and beverage industry, we have moved to a product, approved by the Italian Health Authorities, that has been specifically devised and designed for the healing of wounds generated by the practice of tattooing. It does not substitute or conflict with any existing products on the market, such as tattoo aftercare balms, creams or similar; on the contrary it goes hand in hand with any of such products, supporting and endorsing their use. It guarantees more safety, more hygiene, more protection, which qualify as unique and victorious characteristics on the global market. The adhesive polyuretane film adheres perfectly to dry skin WITHOUT GETTING STUCK WITH THE TATTOO. It lets the tattoo wound breathe and it builds an ANTIBACTERIAL BARRIER that guarantees a thorough protection from external agents. The tattoo film must be changed regularly as prescribed, but once the client applies Dermalize correctly, he/she is exempted from any other action to preserve and look after the healing of their tattoo. No more ink dripping and smearing your clothes, no more continuous and repeated washing of your tattoo every 3 hours, no more missed sport trainings or social events because of the new tattoo, no more “suffocating” your tattooed skin with useless cling-film. On the contrary: reduced scabbing, reduced risk of infection, care for protection and hygene, freedom of movements and actions, no rubbing clothes or any external factor that will damage the tattoo.